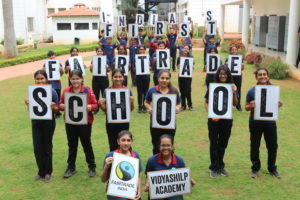 The two week long celebration started on Tuesday with a Fairtrade Day and a special meal containing Fairtrade spices, rice, cashews and raisins.

India’s largest Fairtrade and organic t-shirt was taken to the school where pupils have been writing messages to farmers which will be stitched onto the t-shirt.

As well as learning about trade justice, starting a Fairtrade steering group and holding Fairtrade events, the 2500 students at Vidyashilp Academy have committed to moving to Fairtrade cotton school uniforms. Excitingly this week the school actually had a visit from a Fairtrade cotton farmer from Gujarat who grew some of the cotton used in the school’s new Fairtrade cotton school uniforms! Sarvaiya Pravinkumar Nagajibhai from Soundarya Farmers Producer Company came to visit the school with his wife and children. His eldest daughter, Divya, received a scholarship through the Fairtrade Premium for her higher education and was awarded the highest mark in Gujarat which is an incredible achievement! 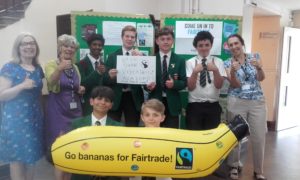 India joins a number of other countries including Germany, Canada, Ireland, Australia and New Zealand who, like the UK, offer a programme which helps schools explore the issues around Fairtrade and trade justice more generally.

The Headteacher of Vidyashilp Academy, Mrs Kalai Selvi said, “The school’s principal ingredients for moulding a responsible individual is on a canvas of social, moral and ethical values. By joining the Fairtrade movement, our students will join the Global community of ethical consumers. They will continue to be the Change influencers’ and contribute towards reducing the impact on social and environmental exploitation.”