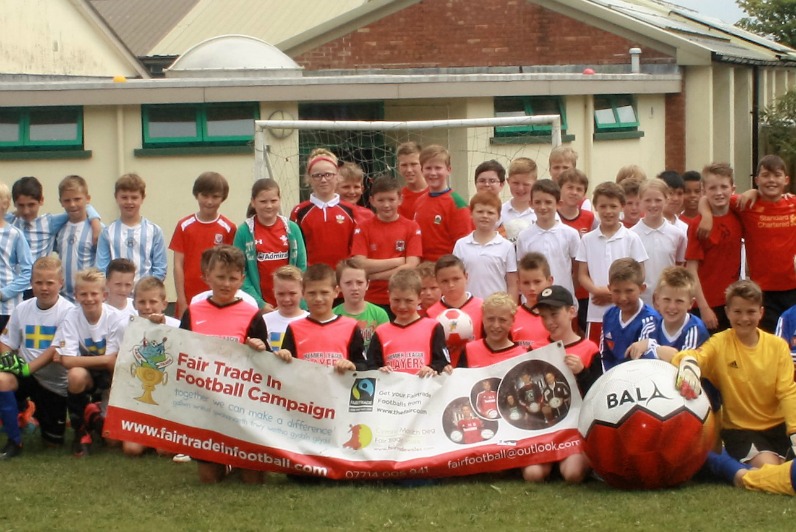 While many football fans may have been distracted by Euro 2016, this year’s most exciting football tournament has been happening right under our noses!

The Fair Trade Euro 2016 tournament for schools was hosted by Taverspite Primary School in Pembrokeshire last Friday and was the third Fairtrade football tournament organised by the Fair Trade in Football Campaign, sponsored by Hub Cymru Africa and supported by Fair Trade Wales.

Twelve schools across Pembrokeshire and Carmarthenshire each represented one of this year’s Euro qualifying countries and were welcomed to Tavernspite Primary School with Fairtrade refreshments – and of course all of the matches were played with Fairtrade footballs!

A big congratulations to all of the teams and especially semi-finalists:

Interestingly, at the time of writing England, Belgium and Spain are still in Euro 2016 with the cup still in sight but the winners of the Fair Trade Euro 2016 were…

Fair Trade in Football Campaign founder Sharron Hardwick said,
“Thanks to everyone involved for making the Fair Trade Euros such fun. This is more than just a tournament it’s about fairness, bringing schools together and supporting Sialkot football workers. Fairtrade guarantees a fair deal. Fairtrade football premiums have already provided water filtration systems, free eye care and bus transport, a fair price shop and school equipment. We can make a difference.”

For more information about Fairtrade footballs, take a look at our new film, ‘Playing Fair: The Story of Fairtrade Footballs’.

Fairtrade footballs can be ordered from Bala Sport.