It’s Fairtrade Fortnight 2018 and we have already seen so much wonderful collaborative work between the Co-op and local schools. 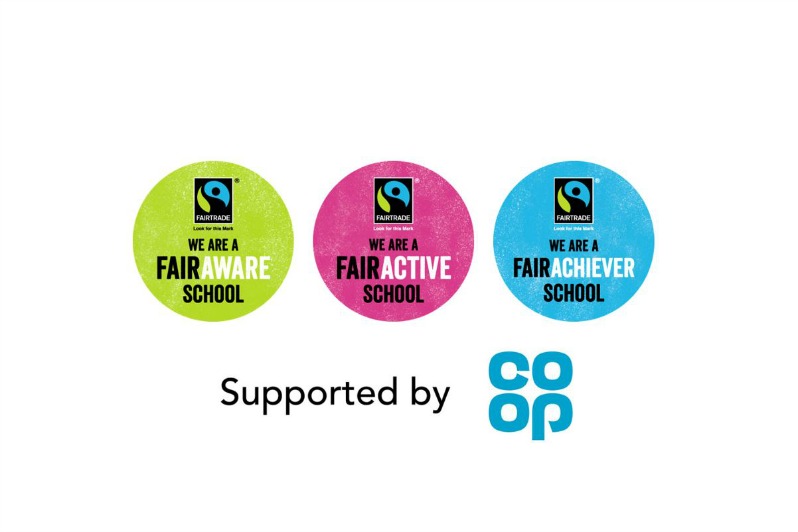 The Co-op sponsor our Fairtrade School Awards so it is no surprise that we are seeing collaborations with schools all over the UK. Yet, who could have predicted the scale of this, the enthusiasm of staff and students… and the sheer range that we are seeing?

With our new videos, games and lessons all themed on the Coobana banana cooperative, who Co-op were instrumental in bringing into the Fairtrade system, there is no better time to combine Fairtrade with co-operative learning and games, in order to build partnerships between schools, the Fairtrade Schools Team and Co-op stores.

Together we can help more schools gain Fairtrade School Awards and educate a new generation about global co-operation, sustainable agriculture and fair pay.

Here are just some of the ideas we have seen so far. Scroll down to see the wonderful pictures.

If you know of an event that we have missed, tweet us at @FairtradeUKed

#BananaArmy on a mission … fighting their way through the elements to deliver Charlotte’s 500 Fairtrade Chocolate bars to Newnham Croft Primary School and to Newnham’s Coop. #FairtradeFortnight #TheCoopWay pic.twitter.com/1xetZoDEkP

Thanks @coopuk for making it happen! pic.twitter.com/reI7mmM1i2

Saying farewell (for now) to Marcial , friend and fellow #Fairtrade co-operator and grower of @coopuk #fairtrade bananas back in Panama. We had a great school event then spent time at the Co-op offices in Manchester. pic.twitter.com/P1b1x1HDAM

Great #Fairtrade lessons at @fryernschool. We enjoyed using@coopuk and @FairtradeUK resources and the children enjoyed the talk – as did I! Looking forward to seeing the fairtrade bunting the children make 😀@MSanger1 @JulianRickman2 pic.twitter.com/B33fPW1ouc

Fab day raising money for Pelton School @peltoncommunitycentre with a #fairtrade coffee morning! Thank you to @peltoncoopfood for donating a our Fairtrade Hamper and @CoopBirtleyCDC for Coop vouchers for hot drinks and cakes!! £122 raised so far and more to come! @tezjohnstone2 pic.twitter.com/O4nCm9DMMp

Well done to Ava for winning the @CoopLees raffle from the #Fairtrade assembly. Hope you enjoy your egg 🐤 pic.twitter.com/NMD4S7huYk

Fairtrade Chocolate Fountain! Huge thanks to Co-op Shawlands for donating choc and goodies. You are our Fairtrade champions! #FairtradeFortnight @coopuk @FairtradeUKEd pic.twitter.com/VT3TRfn7xG

Our happy #Fairtrade competition winners! They didn’t want to share them with their teacher, funnily enough!Thanks @coopukfood for providing the yummy prizes! We can’t wait to see our ‘Super Bananas’ on display in store! pic.twitter.com/AhiuCaVqCJ

Wow… 2nd day of celebrating #fairtradefortnight! Thank you @lucyfwalker for supporting our local school with the baking using fairtrade products.I really do have the best team! Please read this amazing blog from the school! #succeedtogether #Thecoopway https://t.co/IMOcILpGW8 pic.twitter.com/OyLqkq8qgm

Children from Upper wood school in for a shopping experience! Staff making them feel welcome! Paying close attention to our fantastic baking range to take back to school and bake cakes this afternoon!#TheFuture #baking #BeingCoop #TheCoopWay @immysiddique @North05COOP pic.twitter.com/3GSG8N2rjN

Our Fairtrade Ambassadors have just received a standing ovation from their fellow students for their fantastic fairtrade assembly. Our Year 8 students have done this themselves to help embed fairtrade into academy life! @FairtradeUK @FairtradeUKEd #TheCoopWay #FairtradeFortnight pic.twitter.com/lbCHHpP23n

What a great assembly at Mile Oak Primary School this morning to 500 children. Mr Cooper talked about fairtrade fortnight and how it all works. The children will now design posters which we will display in store to show how much we care about fairtrade. #coop #fairtrade #coopway pic.twitter.com/9xL06Z68KQ

Great morning talking at Rose Green Infamt School #Fairtrade assembly this morning with Dan and a few of his team from @coopuk Store in Bognor Regis. pic.twitter.com/yBKdjG9XQB

My biggest ever audience for a Fairtrade talk. Over 300. Pity they had no choice. Newmain primary school in Renfrew. Already doing great FT stuff and links with a school in Sierra Leone #thecoopway #BeingCoop pic.twitter.com/1fGcrkFSmb

Fantastic colleagues from @Newyorkst_coop and other local Co-op stores visited, to tell us all about Fairtrade. It was a great assembly all about bananas!