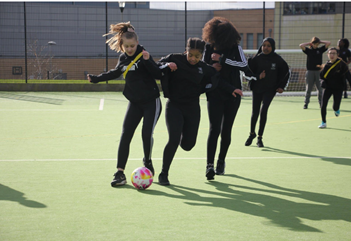 ow that Fairtrade Fortnight 2020 has come to an end, it is the perfect time to highlight some of the amazing activities held at schools across the UK. This year’s campaign for a living income for cocoa farmers inspired many creative events whose successes are sure to have a lasting impact on the participants and communities. It goes to show that you should never underestimate the change that a small group can make when they put their passion and determination into a movement.

This year Co-op Academy Stoke-on-Trent decided to host a Fairtrade Football tournament during Fairtrade Fortnight. In his description of the day’s activities, Daryl Tomlinson, the Fairtrade Coordinator at the Co-op Academy, emphasized the impact this event had on the school’s involvement with Fairtrade as they work to achieve the highest school award.

“As a Co-op academy, we campaign for the same social actions that the Co-op does. And Fairtrade is one that we are fully behind. This is our third year of hosting Fairtrade Fortnight and we hope we can add the FairAchiever Award to go alongside our FairAware and FairActive Awards. It’s important that Fairtrade permeates the culture of our academy and that the work we do now continues to get bigger and better each year. We want Fairtrade to have a lasting impact on the academy and our local community. Next year we plan to invite other Co-op academies to take part as we aim to make it bigger.”

What started out as an 8 team tournament grew to 20 teams as popular interest in the event rapidly swept through the school. By game day, 80 students along with many members of staff (acting as managers) had formed teams of 5, each representing a Fairtrade country, and were ready to play to the finish.

Sharron Hardwick, founder of the Fairtrade In Football Campaign, was invited to lend her assistance in connecting local partners throughout the area with the event. Her work aims to connect local schools and football clubs with sport ball workers in Sialkot and India, all while promoting greater awareness of Fairtrade. For the Co-op Academy’s tournament this year, she brought in members from Stoke City Community Trust, Engage Communities, and Stoke-on-Trent Street Games Stoke who all helped to facilitate the games, and Staffordshire College filmed the event. 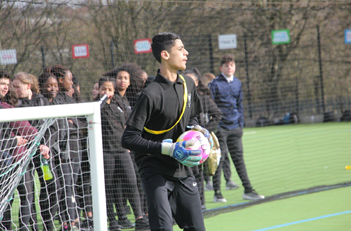 The tournament was broken up into three group categories: Year 8 Boys, Year 9 Boys and a Girl’s Group. Playing with Bala footballs bought by the Co-op, each group played in knock-out style elimination games on the road to the finals. Competition was fierce, and not even the brisk spring morning could cool the fiery enthusiasm from the players.

Spencer (Year 8): “I first learned about Fairtrade last year when students held an assembly. They showed us a video about the Bala footballs and how they are made. So it was great this year to actually play with the same footballs; knowing the history of them and that by using them we are having a positive impact on someone’s life.”

But it was not all sport and competition. Spectators were also given plenty of opportunities to get involved. Between kicking around a giant Bala football and hanging out with Pottermiss (Stoke City Community Trust’s official mascot) there was not a dull moment to be had!

Even the refreshments had a fun twist to them. Through a generous loan from Keele University, a smoothie bike was brought in, bringing both exercise and entertainment for the willing peddler.  Fairtrade bananas and malteasers were used in the smoothies. 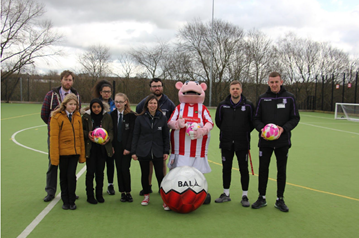 Jensen (Year 9): “The tournament was great. It was played with great sportsmanship and a healthy respect for each other and the reason for the tournament. Fairtrade is becoming more and more important to our academy. And events like this help to raise awareness.”

As with any good tournament, the day ended with the crowning of the champions. Before any team was handed their trophy and Fairtrade chocolate prizes, Sharron gave an inspiring speech about the importance of Fairtrade and the role young people can have in changing the world around them.

Paige (Year 7 Fairtrade Ambassador): “Everyone loved the tournament. And students are already asking when it can be held again. I think it’s something we should do every year. It has helped more people talk about Fairtrade and that is what we want. Maybe next year we can invite local primary schools or other Co-op academies.” 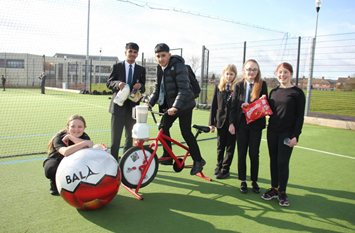 While there is nothing like a bit of healthy competition to provide a platform to raise awareness for Fairtrade, the overall levels sportsmanship and enthusiasm were the real highlights of the day. Congratulations the Co-op Academy Stoke-on-Trent for their incredible Fairtrade Fortnight event and a massive thank you to all competitors and spectators for their passion and dedication to Fairtrade demonstrated during the tournament!

Isabelle (Year 7 Fairtrade Ambassador): “It’s great when students and staff work together to put on events that benefit others. We know the importance of Fairtrade and why we need to keep talking about it. It changes people’s lives. And we want to be part of that change.”

Interview with a Fairtrade film-maker

Our Climate Our Future: Schools Action Pack launched for COP26